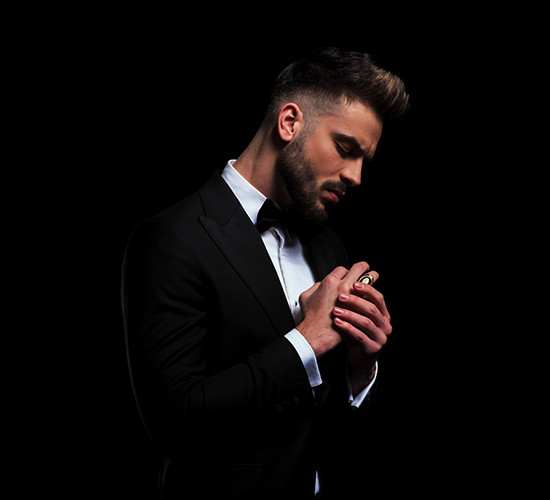 The most powerful men of the times have worn the most striking rings on their fingers as a sign of their power, wealth and the important role they have/had. Today, even if a man’s ring no longer symbolizes these same values, it is still appreciated and worn by contemporary men.

A ring is a circular piece of jewelry of varying thickness and can be made of various materials. Since the appearance of rings 21,000 years ago, several peoples have made them an integral part of their culture, modifying them and giving them different symbolism. Some of these rings are crafted in metal, plastic, wood, glass or animal bones. According to the model, a ring can be set with precious or semi-precious gems. Contrary to what most people believe, rings are not pieces of jewelry reserved for the ladies. Indeed, we can see throughout history that the majority of people who wore rings in the past were men. Even though men’s rings carried specific meaning in that time and that particular meaning is less present today, ring symbolism is still present for men in the 21st century.

The history of men’s rings.

The oldest rings ever discovered were found in the Czech Republic. They were made of mammoth ivory and were attributed a decorative role as well as a form of currency. Archeological excavations uncovered rings belonging to the Hittite people. Most of these were signet rings. The Egyptians also possessed a wide variety of rings that often bore the name of the divinities and were worn as work signet rings. Greek rings were inspired by the Egyptians ones even if they were not as imposing and were made of metal that was not as precious as bronze. In the Middle Ages, rings started representing power and high status. Some of them were also used as an amulet and engraved with occult symbols while others represented the memory of a deceased person. Rings often appeared in stories and legends as a piece of jewelry with magical powers or as the final goal of a perilous quest.

A wedding band is the ring exchanged between a man and a woman when the wed. It is often rather neutral, fine jewelry and made of a single metal, often gold. It represents the love of and the attachment to one’s beloved and must be worn with pride. A wedding band is without a doubt the ring the most suited for a man. It is worn on the ring finger which is the only finger with a vein that leads directly to the heart.

A signet is a ring bearing a symbol or initials engraved on the bezel (normally the base where a gemstone is set). A signet ring inspires respect and admiration as it was or is, for some families, the sign of the descendants of a dynasty and serves as an indication that the one wearing it is perpetuating the name of an illustrious family.It is often made of gold and engraved with the family’s initials or coat of arms. In the past, people who were not of noble birth and not well off were not allowed to engrave their initials on their signet ring. Only the Paris “bourgeois” had the right do so. Traditionally in the past, the eldest male child in the family wore it on his left ring finger whereas the other men in the family had to wear it on the ring finger of their right hand. Unlike that period anyone today can engrave what he likes on his signet ring and wear it where he likes.

Multiple bands, armor rings, championship rings… There are as many types of rings as there are types of personality associated with them. Each man should therefore select the ring that suits him best, wear it on the finger wants and match it with his personal style. The ring will portray the desired symbolism.