For decades, emerald has been regarded as one of the most valuable stones on the planet. Tsavorite garnet, on the other hand, has become a major competitor to the classic emerald in the last fifty years. Tsavorite is a beautiful stone with a long history of use as a decorative stone in jewellery from diverse cultures across the world. Given the enormous variety of variants of this coloured stone, this is unsurprising. Tsavorite is regarded an exceptional gemstone due to its rarity, vividness, and the beauty of its green colour. 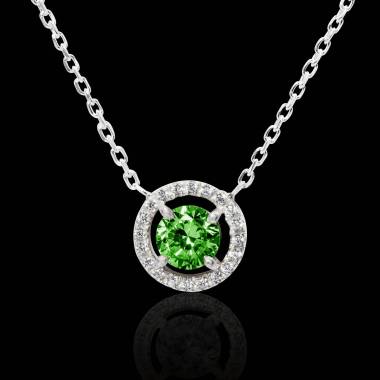 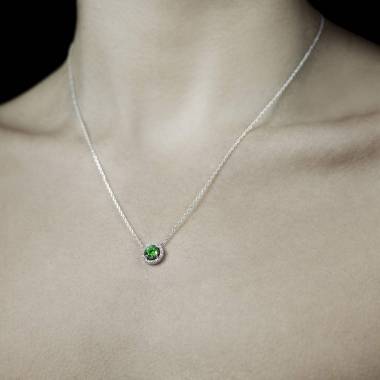 Tsavorite garnet was discovered in East Africa in 1967 and is named for the Tsavo National Park in Kenya, where it was discovered. When compared to emerald, which was found in the 16th century, gemologists sometimes refer to this stone as "new."Tsavorite is a green variety of Grossular, which is itself an aluminous member of the calcic Ugrandite series, which is part of the massive garnet family. Uvarovite from the chromium pole and Andradite from the iron pole are both parts of the Ugrandite series. Tsavorite is a rare and valuable gemstone that is expensive and highly sought after in luxury jewellery, particularly when it weighs more than 5 carats (1 g). It has to be said that the colour pales in comparison to the most stunning Zambian or Colombian Emeralds. Tsavorite is also not generally embellished with anything other than cutting and polishing, unlike Emerald. Tsavorite, a member of the lovely grossular garnet family, has an extreme green colour due to the inclusion of vanadium and chromium in its composition. Tsavorite garnet is an ideal and long-lasting choice in jewellery because of its high refractive index and lack of large inclusions. Tsavorite garnets of exquisite colour that are fully transparent to the naked eye can be found for a fraction of the price of emeralds. Furthermore, apart from cutting and polishing, these stones are never subjected to any human embellishment. Tsavorites are 200 times rarer than emeralds in the garnet family, according to estimates. It is costly due to its successful hardness, unusual inclusions, and emerald-like appearance. Its price varies depending on size and colour, and it does not need treatment. Its green colour is particularly desirable. Tsavorite is present in Kenya, but it can also be found in Tanzania, Madagascar (where small sizes are the only ones found in small quantities), and some mines in Quebec. Tsavorite, originally grossular garnet, has only been sold in the jewellery industry since 1974 when it was called grossular garnet.

Why choose a Tsavorite Pendant

If you want to send a tsavorite pendant as a present, we choose the teardrop pendant, which is the perfect gift. There are no issues with finger size or pain. It is very understated, so the recipient will not feel self-conscious if they're not used to wearing jewellery. It is one of the most affordable ways to get a pear cut gemstone. A decent introduction to jewellery, and with the same colour as emerald, it is a great substitute. Tsavorite's rich, bright colour, as you can see, makes it an excellent centre stone or paving stone, and it's a good replacement for emerald. Jaubalet recommends that you find the best balance between the strength of the stone's colour and its clarity, which will ensure its luminosity and therefore brilliance, in your opinion, since it is also a matter of taste. The stone's colour should be uniformly spread throughout.

Transparency: Avoid the glassy side.

Weight: With the same quality, the heavier the stone, the rarer and more costly it will be. This would be determined by the financial constraints.

Cutting shape: tsavorite is often cut into an oval shape

How to choose your Tsavorite Pendant

Which metal for a Tsavorite Pendant

Virtues and benefits of garnet

Tsavorite is often thought of as a stone of transformation, even transmutation. It will be able to assist in overcoming challenges in drawing an encounter, transcending loving desire, and improving sexual energy. Garnet was thought to reinforce the heart by Saint Hildegard of Bingen, a Benedictine nun who healed with stones in the 11th century. It improves precious resources, heals bleeding issues, and controls blood circulation. It has anti-poison properties. It is not recommended for people who are jealous or angry; instead, it is best for people who are cool and composed. This energizing stone will help you battle fatigue and apathy while also purifying your chakras.

The garnet wedding leads to two years of union, and the birth month synonymous with tsavorite is January. The stone is connected to both the Aquarius and Capricorn zodiac signs. The tsavorite pendant is thought to be a strong defensive talisman against Rahu, the eclipse spirit, in Vedic astrology. Garnet is associated with the Chinese zodiac sign of the Rat. It holds melancholy at bay, and it serves as a deterrent to intruders.